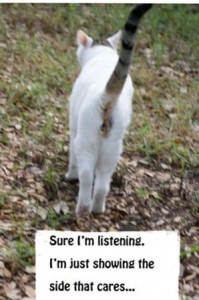 (Tom Brown is a cat.  He belongs to Maggie and Howard Millus.  But he thinks otherwise.  This is just one of his several personas.)

I have to live with two humans- Maggie and Howard Millus (aka Mom and Dad).  I didn’t ask to live with them, they just showed up at the adoption center and picked me, after letting me sit there – in confinement – for two whole months.  Now what does that tell you about them? Like they’re not fast thinkers, they don’t make decisions fast.  Indecisive is what I call it. But then I didn’t get to go home with anybody else.  Sometimes you just have to take what you can get when you are six years old and a cat.

Mom says I’m a Turkish Van, whatever cat breed that is.  She says cats of my breed are explorers and swimmers.  Dad really takes this to heart after I’ve been out in the back yard excavating trenches for a big shit.  I like to push the dirt with my head, kind of like a mini back hoe. I roll my head to move mounds of dirt.  I feel like a lumberjack moving  logs.  But the dirt sticks to me, it’s all over my ears, face and paws.  Then Dad says it’s time for me to show off my swimming skills – in the shower.  Now I ask you, who swims in the shower?  When Dad and Mom say, “cats took my mind”, they must really mean it.

Most of me is white fur, except for my tail, which like I like to swing in circles when I run. Mom says it looks like I am lassoing flies.  Mom must think I’m Jewish.  Probably a Turkish Van Jew.  Because there is the gray tabby patch on my head.  Mom says it looks like a yamaka.  Dad might think I’m Jewish, too.  The other night when I was sleeping on Mom’s legs, he said it looked like I was sitting shiva.  Maybe it’s because Mom didn’t look too good.  Or because I had her legs pinned, good and tight, and she couldn’t move.

I live with two other cats, Violet and Pi.  Pi is an orange tabby and Violet is a gray tabby dumbass.  Pi’s name is a misnomer.  He’s not really that smart, although he may think he is.  When mom gets mad at him, she calls him 3.14 and he ignores her.  As for Violet, I would like to see her get an electric shock collar.  Violet is gaining weight.  If she lost her fur she would look like a shar-pei.  And she fouls the air really bad.  She never covers her shit.  She just leaves it there on the surface of the litter.  I have to go outside to shit or go get Mom or Dad to clean it up.   Then  I can use the litter.  If no one cleans it up, I will use it anyway and then  go sleep in Dad’s bed.

My humans watch the one-eyed monster which they call a “TV”.  They call their favorite sport football.  Dad will swear when he sees his team is losing.  “The idiot dropped the #**%!+!! football” Mom and Dad likek to watch overweight humans throw the ball, try to catch it, run it, and then get hurt.  Such foolishness. If I were allowed out, I’d whow them a real sport, mousing.

They let Pi out.   Why they won’t let me out, I don’t understand.  They keep saying something about “not streetsmart”.  How can they think Pi is streetsmart when he goes out and lays in the middle of the street. It’s a good thing few cars use our street or he’d be pothole filler.  Anyway,  Pi is good at mousing.  He likes to grab mice by the tail and throw them in the air.  Then he catches the mouse on the downfall.  By the neck.  If I were doing it, I’d run that mouse over the doorstep, like a goal line, right into the house.  Then I’d grab it by the neck and do a quarter roll with my head and sling it right at my human, preferably Mom.  I’d score a goal  and maybe what they call a two-point conversion.  The first point would be for the mouse screaming bloody murder and the second point would be for Mom standing on a chair.  But that’s only fantasy mousing, kind of like fantasy football but nobody’s taking any bets on me or the mouse.

My humans keep secrets from me.  Like where we’re going in the car.  I never get to go anywhere I want to go. The only place I go to is the Vet’s and that is a real gut-wrenching experience.  I fixed Mom two times for doing that.  I pooped in her lap. She and the car looked like mixed media art.

I think I’m going to become a stoic.  On the other hand I might consider being Zen.  I’m very Zen about food.  I can take it or leave it.  I usually leave it when it’s not good enough to suit me.  But if Violet or Pi want it, I can change my mind.  I haven’t tried Zen Mousing.  That is, sitting and staring at a mouse until it dies.

I could be Zen about a lot of other things.   If only I could learn how to move from one dimension into another, I would pass through that screen door…right now.