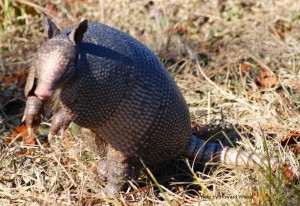 Who you lookin’ at?

An armadillo – if you don’t know what one is – is a warm-blooded creature about the size of a cat…but without the fur. And it won’t caterwaul all night on a full moon for no good reason.  The name “armadillo” is derived from the Spanish language.  Loosely translated, it means, “What the hell am I eating?”  Armadillos are related to sloths, but they are not arboreal.  They will not climb or hang from trees like the children in your neighborhood, and chronic sinus congestion prevents them from vacuuming up ants like anteaters.

Armadillos have long, front claws. They use them for digging up leaf-covered soil, lawns, flower beds, and anything else you might care about.  They are excellent excavators.  They have been known to excavate tons of dirt.  Some have even tunneled all the way from Central Florida to Tallahassee where it is rumored a few have become state legislators.

Armadillos have also been known to dig up extensive areas of golf course turf although none has ever been observed making a hole in one. Some homeowners  call them nocturnal marauders  and sit up all night waiting to hunt them.  In Florida, it is illegal to destroy armadillos. Homeowners are not allowed  to use their shotguns or make use of the infamous Stand Your Ground law.  But they can chase them all day and night as long as they don’t get caught or have nosy neighbors watching. 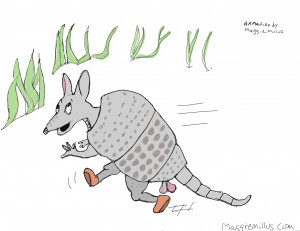 Catch Me If You Can!

If you want to catch an armadillo, you will have to run very fast.  At least 30 mph.  Which is very hard considering that most of us can’t even walk faster than 3 mph.   And you will need a good pair of running shoes, shoes with deep grooves or spikes for traction in soft dirt.  Otherwise you will be wanting crutches to drag yourself to medical assistance after you pull your twisted ankles and mud-encrusted butt  out of the deep furrow you just fell into.

Armadillos are hungry all the time. If you stalk one, you will hear snorts and grunts as they root insects and worms out of the dirt.  They pose no danger to humans or small dogs.   Floridians should be grateful that that the 6 foot, 600 pound  armadillo, Holmesina septentrionalis, is extinct. This armadillo was not  predatory but its tunnels  would have been a serious concern to any ambulatory biped that might fall in.

Considering the size of human populations at that time, a person falling in such a tunnel hole would be stuck in there for a very long time.  Yelling at the top of one’s lungs  would not help.  Unless the excavated tunnel was in somebody’s garden or on a heavily used golf course.  (This would  have been unlikely because Holmesina lived in the Pleistocene (500,000 to 11,000 years ago) an epoch known for its strict zoning regulations.)

Human attitudes towards armadillos vary. Some people think armadillos are cute precious animals. Others want to conserve armadillo populations so that their great grandchildren can watch them dig up future flowerbeds.   Floridians think they are pests and are afraid of them.  Texans consider them a delicacy –“ tastes  like pork” –  with the consistency of a chicken with leg cramps, a tired chicken, one exhausted from running all night.  Some people, also Texans, like to use flame throwers to turn them into blackened ‘dillo nuggets.

Although armadillos have poor eyesight, they do have a good sense of their surroundings. They have been known to jump into the air when startled.  If you are going to sneak up on one it is best to wear a helmet and chin guard so that its impact with your jaw will be minimized.  And if you are going to chase an armadillo, you’d best practice running obstacle courses.  Steeplechases, like the Steeplechase Championships in Lithuania, are good for that.

Armadillos have little economic value unless you like armadillo nuggets,  armadillo ash trays,  or armadillo coffee table tchotchkes. Their value is primarily ecological. This is because of their digging.  There is nothing more impressive than a ravenous armadillo throwing clods of sod and dirt at your kitchen window. On the other hand, if you are out in the woods with an armadillo, it is more likely that you are the one with little environmental value.