We live in a “fixer upper.”  There are so many things to fix around here.  And I know just the person to fix them.  And I really like to watch him, my husband – Howard,  fix things.  As a matter of fact, I like to watch him do any kind of work. I should have been an engineer.  I can watch things move all day…especially muscles. There’s nothing like a well-built handyman with a hammer in his underwear.

So many things to do in this house, and I’m not talking house cleaning. The floor tiles need repair.  The grout seams have cracked.  The tiles snap, crackle, and pop when you step on them.  Louder than breakfast cereal.  The cats think it’s a game, to play hop scotch, to wake us up in the middle of the night, jumping on the loose tiles. 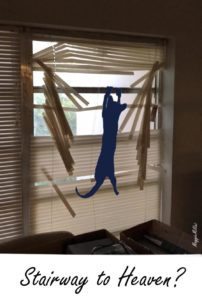 The cats decided the blinds in the pantry window were a stairway to heaven. The blinds fell down weeks ago. We needed new ones anyway.  We bought new ones but they’re still sitting there, in front of the bare window, on top of the pile of car floor mats, yet to be installed.

There are other things to do in the meanwhile.  Howard has the time, but that doesn’t mean he’s going to do them. Like the kitchen faucet. Turn the water on and the pipes vibrate. They boogaloo.  Cavitation is what he calls it.  All we need is a new faucet,  but then he’d have to replace the undercounter pipes, the p trap, the water filter, and whatever…

One thing leads to another.  The bathroom tiles are loose.  The wallboard underneath is moldy and squishy.  He’ll have to replace the wallboard before he can retile.  And then we’ll need a new floor, sink, vanity, tub.  Howard is going to be busy… 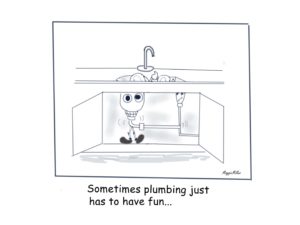 I like to get things done, especially when I’m not going to be the person making the repairs. I try to be persuasive in lots of ways.  Sometimes I even exaggerate:

“There’s something loose in the bathroom.  Behind the walls.”

“It has a tail and scales.  I saw it skittering up the wall supports behind the missing tiles.”

More silence.  I really hate it when a man is silent.  When this one won’t answer a question or when he answers a question with a question. It’s like it’s a deliberate evasion based on a lack of commitment.  It’s his way of telling me he has no intention of doing the work.

Maybe I should leave it at that, but I can’t.  I could be more insistent.  I should have said, “I think I just saw a Gila monster. It escaped the bathroom and It’s crawling under the bed. On your side.” This might work.  After all, worry and insomnia  do strange things to a person’s brain. And it’s good motivation for getting things done.  Frustration, particularly mine, accomplishes nothing.