This article is from the local grassroots magazine, “Florida Pestilence”.  Originally intended to enlighten readers about the feral hog problem in South Florida, this article interviews a dyspeptic Florida homeowner and contentious swine last seen chowing backyard turf along Interstate 95.

It is not unusual to observe Florida Homeowners chasing feral swine along Interstate 95, and it is often difficult to determine who is chasing whom.  Let’s tap into the “thoughts” of  Hawg DugRoot, recently observed slinging turf in the yard of one angry South Florida resident, Claude Hoppenhoofer. 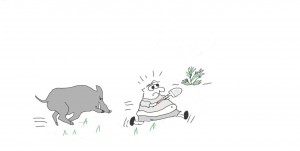 Hawg:  ” I was there.  I oughta know because I was causing it – the  ruckus – when the TV truck with its big satellite up link rolled up.  They were out there taking pictures of me when this bald-pated, porcine human (I should know what porcine is, I’m an authority) tore into his backyard screaming and cursing.  He’s charging across the dirt, tearing out what few strands of gray, sweat-soaked hair he has, and the next thing I know, he’s chasing me with a shovel.

And now, a reporter is interviewing him first and  he’ s complaining about feral animals (that be me) destroying his property:”

Reporter:  “This is Mr. Claude Hoppenhoofer, the human homeowner of this domicile….Mr. Hoppenhoofer, you seem very distraught.  Could you tell our viewers why?”

Reporter:  “That’s some strong motivation there.  Could you tell us the reason for it?”

Hoppenhoofer:  “That  (Bleep-bleep!) feral swine! (Bleep! Bleep! And… Bleep!…Bleep! Bleep!…)   He’s torn up my lawn, fornicated in my shrubbery , and (Bleep!), and he’s even scared the (BLEEP!) out of my kids at Halloween.  Chased’em down for their candy!  I tell you, he’s (BLEEP!) on my driveway for the last time!” 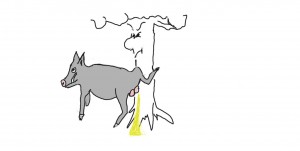 Reporter:  “I understand your concern.  The damages must be in the thousands of dollars and it must be very frightening.”

Hoppenhoofer:  “That (Bleep!, Bleep!) swine has no respect for gated communities! Yeah!  I see you, you (Bleep, Bleep, BLEEP!) porker! You’re bacon on my plate!”

Reporter: “While Mr.  Hoppenhoofer ‘s viewpoint seems legitimate. Let’s see what the hog in question has to say…”

Hawg: “That old, bloated windbag chased me with a shovel!  That 300 lb human bag of huffing, chuffing, sweating lard and guts!   Now, I ask you, who’s charging whom?”

Reporter:  “Mr. Hawg.  You seem to be relatively unharmed by this chase.  And you seem to enjoy the return attack.  Would you care to elaborate?”

Hawg: “Attack? All I was trying to do was help my little sister, Jasmine, find some grubs for her litter of piglets.  We’re a close-knit family unit, ya know.”

Reporter: “A feral unit of pigs, you mean…”

Hawg: “Jasmine’s baby porkers, there’s nine of them.  Li’l Wheezer’s the smallest, poor boy has asthma… And then there’s Twerp, P-nut, Raspberry, Pookie, Rooter, and Tooter.  Tooter…that poor boy has bowel problems…too many fermented grubs and acorns. But can he eat!

And then there’s  Roscoe, and  Rutter. Rutter! He’s the biggest but good for nothin’.  And they all gotta eat!”

Reporter:  “Mr. Hawg, Mr. Hoppenhoofer claims you loaded his driveway  with a mountain of hog dung, and that he needed a dump truck  to haul it away. What do you say to that?”

Reporter:  “No. That’s not what I meant.  Why did you foul his driveway?”

Reporter: “ Mr. Hawg, we’ve seen you and the homeowner running this way and that, chasing each other all over the place.  Do you have any advice to homeowners on how to avoid these confrontations? “

Reporter:  “And you, Mr, Hoppenhoofer?”

Hoppenhoofer:  “Fire up the barbeque!”