“You cannot survive a traffic jam without patience.” (Wikitravel)

I just saw a media photo of a traffic jam.  It was I-95 and it looked like a parking lot.  And wouldn’t you know…there was my car, smack dab in the middle of it!

I was taking a short cut home on I-95.  That is, I was trying to bring home fried chicken for dinner. And  I was hungry, very hungry.

I secured the bucket  on the seat with the seatbelt.   I should have locked it in the trunk  because the hot chicken aroma soon filled the car.   I was salivating like a bulldog.

No sooner did I charge onto the acceleration ramp then I saw them –  cars, cars, and more cars, like chickens in a crowded henhouse.    All backed up, from on the Interstate into my acceleration lane, in long linear rows, like dominoes. No way could I extricate myself, all I could do was inch forward, pushing like a bulldozer, into an outside lane.

And so I sat there, hungry, stuck  in the middle of a highway parking lot, with a bucket of hot fried chicken beside me. Just me and the chicken.

I and the rest of the surrounding highway humanity were going nowhere…for a long time.  And all I could smell was more chicken. Greasy, salty, fried chicken.    There was a cloud of chicken vapor in the car and I wanted to lick it.   I could almost feel the chicken grease sliding down the back of my throat.

Chicken fumes coated the car windows.   I wanted to grab a leg and start gnawing.  I had to swallow hard to keep from drooling on myself. I was on the road to slow motion starvation.

I tried really hard to keep my hands out of that chicken bucket but my stomach was growing teeth of its own. Its growl was turning into a roar. I was obsessed with chicken parts.  Fowl thoughts ran through my mind like chickens with their heads cut off. Hunger hallucinations began to strut their stuff.

I felt like I was sprouting feather bumps.  I needed a distraction, so I stared at the people in the cars beside me. The occupants began to look like chickens…

The  driver on my right  looked really fowl.  She had a mother red, hot comb.  Due to high blood pressure, I guess.  Her poults were in the car.  They were  all over the seats and pounding at the windows.  The littlest fowlet  dumped in its diapers. Poor distracted parent, stuck in traffic with a heavy load of doo and no supper in sight.   I could see parental patience ebbing  fast…   Hunger does that to you.

At least, I had the fried chicken. 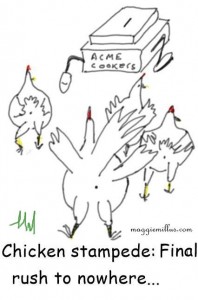 The bucket of chicken passed more gas.   A lot of gas.   Pungent, spicy, greasy gas. The car reeked of chicken. I had no escape. I should have strapped the bucket to the roof. But then I would have lost chicken pieces as I drove. (Who says chickens can’t fly?)

Who am I kidding? I’m not going anywhere. Anywhere is nowhere in sight.

I stare at another car. The driver is texting. But I don’t see fingers, just clawed toes hitting letters and numbers. Wait! Is that a nose or a beak?. They text some more. I want to reply,” Pppyyyuck! BBBBuccckkk! Byuckk! Buck!” Bet they’re hungry too. On the other hand, maybe they can’t speak chicken.

I inched the car ahead. Oh boy! Two inches closer to home. I see drivers are trying to cut each other off, like there is really driving space. They are irritable. Angry. Consumed by chicken road rage or so it seems. I wonder if they will peck each other to death. There are angry trills, “Buck, Buck…aaack!” followed by, “Buk Buk Buk Buk! Buk Buk gawaak!”

A lane finally opens up. The police are motioning us through. The chickens are leaving the henhouse. And so am I. I’m leaving this damn bottleneck. If I could drive any faster, my head would bobble.

Too bad there are only two pieces of chicken left!