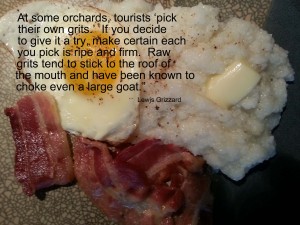 These grits are just ripe….

I love grits.  But grits are confusing to a lot of people.  Especially northerners.  I once tried to order grits with breakfast at a Boston restaurant and the waitress had no idea what I was talking about.  Or maybe she just didn’t understand my South Florida accent.  But then I don’t  speak Boston either.

For those of you who don’t know what grits are, they are a breakfast food.  Grits are made of dry,  ground, corn.  They are often referred to as hominy,  not to be confused with “Hominy people did this to you?” or  “The Olson twins yodeled in two-part hominy.”  In many places in the South, grits are a delicacy.  Since 2002, they have been the “official prepared food” of Georgia, right next to hog jowls and collards.  Sometime ago, about half a century, a South Carolina paper even proclaimed that “a man full of grits is a man of peace.”

Now grits can be bought in several forms.  They can be bought as packaged “instant grits.”  Just add water and microwave to get a bland, tasteless bowl of gruel.  So unpalatable that you will have to add a tablespoon of salt just to know it’s in your mouth.  And then there is the “not so instant” grits.  This type of grits will take longer to cook, and if you don’t get it right, you will end up with a white sludge, thick enough to choke a camel.  You will be picking the grits out of your teeth for hours and you will need a shovel to scrape them off your tongue.   And then there is the “cook for a long time, boil over onto your stove grits.”  These have the most flavor.   Unfortunately, you will still need that same shovel to chip them off your stove top.

Cooking grits is tricky.  Because they are really watery at first.  It makes you want to add more and more grits or thicken it with salt.  But if you get it just right,  they will be smooth and creamy after you boil them and then let them sit a while.  You can mix them with your eggs and then serve them scrambled,  like my brain is in the early morning when I first get up.

Oh, and don’t forget the butter.  Grits are best when swimming in butter.  All that butter and grits can solve issues involving constipation, if they don’t  give you gall bladder problems or  bloat.  You can also add gobs of cheese or if you are some sick pervert, you could use milk and sugar instead.  Oh?  The dark specks in your grits?   They are normal for corn.  Unless the grits are out of an opened, unsealed box in my kitchen cabinet.  Not to worry.  Parts is parts.  Just a little added protein.