I have a bad reputation for trick or treating on Halloween.  Once I went out dressed as a drunk (it seemed natural). I was going door to door with my ale glass when I saw a little kid in an animal costume.  He was being walked by his mother. That is, she was trying to walk him. She had him by the hand but the kid was pulling, lunging in all directions, like an idiot dog.  Except that he wasn’t dressed as a dog. And he wasn’t on a leash.  But he could have been a dog. Sometimes kids are.

I caught up with them.  I said to the mother,” Oh, that’s a cute costume.  What’s he supposed to be?”

“A beaver,” she replied.

”Oh, he must be Bucky Beaver!” I said.  “Where on earth did you get such big, fake teeth?”

One year I dressed up as a ghoul.  I had a black tattered sheet, big furry mitts, and a huge, leering Styrofoam head.  The head was made by a taxidermist friend, just for me.   It was a huge head with dripping,  varicose brains.  Big pointed teeth and humongous goat eyes made it uglier than homemade soup. The face looked gluttonous and I made it worse, I  packed cooked spinach between the teeth. But I didn’t chase any trick or treaters down the street.  I didn’t have to, their parents were running way ahead of them.

This year I think maybe I should dress like a zombie. Zombies are in.   I could lose body parts and scare more trick-or-treaters.  On the other hand, I’d be lucky if some parent didn’t shoot me.  I guess the dead don’t die easy.

I thought it would be cool to go to a séance in a cemetery. But then I stopped dead in my tracks.  Not literally, but I did hesitate …Should I really  visit a cemetery at night? Maybe.  Just a “visit”.  To scope out the place.  To see what’s going on.  You know, see where the action is.  But maybe not.  Because who wants to roam around a cemetery at night, especially at full moon? 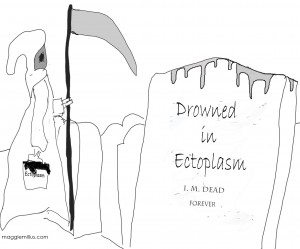 With my luck, the moon would hide behind the clouds and my flashlight would go out. And if you’re walking in a cemetery at night, you have to watch out for things, like ghost snot – better known as ectoplasm.    You don’t want to step in ectoplasm, it’s hard to get off your shoes. It may be colorless but it’s sticky, so sticky you’d have to scrape it off on a marker.

I wouldn’t want to trip on a grave marker.  I’d probably land on a headstone or bump into an angel. Angels make me nervous. Especially if they’re angry.   I’ve never been the same since I saw that Dr. Who episode with the angry, weeping angels on the attack. There’s nothing worse than an upset angel with bared teeth.

I have an overactive imagination. Especially at night.  What if I heard somebody’s footsteps behind me?  Rodent scratching and skittering is bad enough.  But somebody? What if they were dead?  What if there were a lot of them?  I would run and I would  leave a trail as I ran.  And it would not be ectoplasm.

One thing I did decide about cemeteries and Halloween. Absolutely no Ouiji Boards allowed!  I don’t want to release some quantum-locked courier of nasty habits.  Like procrastination. I do enough of that as it is.

So, cemeteries-…should I really visit one at night?  I don’t think so.  Especially if it’s the cemetery where my mother is interred. With my luck she’d be out walking one of her dead dogs, probably the Doberman.  Or worse yet, she’d just be waiting for me.  Which she’s probably doing anyway. Waiting to tell me how indecisive I am.