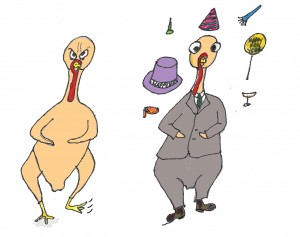 Stuffing the turkey is only part of the cooking process. You have to “dress” it too. Since I’m not going to be cooking this turkey, I considered an alternative holiday dressing.

I dread the holidays.  All that cooking.  Not that I actually do it.  I can’t remember the last time I dressed  or stuffed a turkey.  That’s Howard’s job now.  But if I did, I have a few special ideas I’d like to try.  Like Popcorn Stuffing.  I found a recipe  somewhere for “Popcorn Stuffing”.  Now that sounded really interesting.   Innovative.   But I always like to think ahead before I cook or bake something.  In this case, I expect that it would keep my kitchen, and probably me, in one piece.

I’m not going to show the recipe.

Now If I could time its velocity as it came through the oven door and didn’t get hit upside the head in the meantime, with a little math, I could calculate the force of impact when it hit the kitchen wall or  whoever was dumb enough to stand  in front of the oven.  For a 14 lb turkey, the force of impact would be about 30 lbs.  Now I’m not sure what a 30 lb impact is like, but I don’t think it would leave an oven door intact and it would probably send a person to the Emergency Room.

I doubt  the turkey  would  go through the kitchen wall, but I can hear Howard in the next room yelling, “Hey Maggie, what the hell was that noise?” to which I would  reply, “Nothing, dear.” This would then be followed by a lot of scraping and scrubbing for the next week and a half, not to mention a busted oven door, and the complaints, grumbling, and swearing continuing into the next holiday…