I’m Going Where? (Or Ambivalent Ambition… ) by Maggie Millus

When I was a teenager, I thought I wanted to be a biochemist.  I saw myself running around a lab in a white lab coat.  I loved test tubes and mixing chemicals. But no one ever gave me a chemistry set.  There  was always that KABOOM! factor.  So I made up for it. I mixed and burned household chemicals.  Everywhere.  The kitchen. The garage.  The porch.  Every chance I could.  I guess I was subconsciously looking for that missing KABLOOEY! and a mushroom cloud.

My mother wanted a doctor in the family.  She saw the white lab coat too, but added a stethoscope. Test tubes, flasks, and volatiles meant nothing to her.  It was easy to disappoint her.

I considered being a veterinarian, but the dog had other ideas.  I readjusted my goal to animal groomer.   I trimmed the dog.  There were chunks of fur everywhere.  She looked like a bumfuzzled monkey with a buzz cut.   Every time I approached her with scissors, her panicked brain told her to flee.   And she did.  She didn’t come out from under the bed for three days.

My grades were good but they weren’t going to get me into MIT or Harvard. Why bother when you can’t afford it?   I took all kinds of aptitude and standardized tests.  I went to the school guidance counselors to find out what I didn’t know I wanted to do, but that got me nowhere.

My high school homeroom teacher thought I should put an end to all of this and just pick something, anything.    But nothing special, because I was a girl.  He avoided this sexist label when he said, “Maggie, you’re good, but not that good.”   I guess that was because I was worth only 77 cents on the dollar.  So off to a state university I went.  It certainly wasn’t any of those big name, very expensive Ivy League schools. 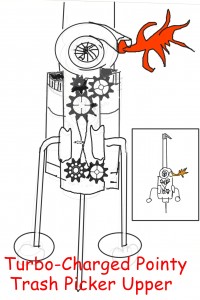 When I was a college freshman, I majored  in engineering.  I was confused. I thought life’s problems could be solved with an equation or algorithm.  I was on my way to class one day and as usual, I was late.   As I approached the engineering building, a  grounds custodian stabbed a piece of paper with his pointy trash picker upper and said, “Do youuu know where you are going?”

My first reaction was to huff and puff.  I was running uphill.  No easy feat on a hot, humid, Gainesville day.   I stopped dead in my tracks.  What the hell does he mean? Does he think I’m lost? Is his question  a philosophical  one –  is he asking if I know where I am going in my life?

Then I looked him straight in the eye and replied, “Hey! You ought to get that thing a turbo charger!” He looked at me, puzzled.  He had no idea what I was talking about.  I said,” You know, for your pointy trash picker upper!”

He said again, ““Do youuu know where you are going?”   How would I know? I was just a freshman.   Did it really matter?   I just kept going. And I’m still going.   With no special destination except   for the usual one, 6 feet below and pushing  daisies. To quote Lewis Carroll:  “If you don’t know where you are going, any road will take you there.”