Insomniac?  Who me?   So I don’t sleep that much.  Big deal.  Who can sleep when they have scazillion thoughts flying through their mind?  It’s like having hornets in your brain, only there is no buzzing. Most of the time.

I saw on the Internet that there is a group called Insomniacs Anonymous. Somehow I can’t see myself joining up.  What would it be like?  Would I sit in a circle, introduce myself, and say: “Hullo, I’m Maggie and I’m an insomniac.”? Do I provide a testimonial about how I got this way?  I could start out with:  “I have this husband, Howard Millus, great guy by day, hunter at night….What does he hunt?  Small game…skittering game…cockroaches!” I can see everybody in the circle staring at me.  Boy, that’s enough to keep me up all night.

But wait, maybe my mother made me this way.  Or maybe it was my father.  She always did say, “You’re just like your father…” So maybe he was an insomniac too. I  think insomnia is catchy.  You definitely can get it from your parents. It’s probably in everybody’s genes.  Someday there’ll be gene therapy for insomniacs. Scientists will find a way to target insomnia genes with a viral probe.  It’ll be like getting the flu except no diarrhea.  Although admittedly, diarrhea will give you insomnia…In fact, you can stay up all night with diarrhea and if it’s bad enough, you’ll stay up for days. That’s insomnia, the hard way.  It’s hard to say what causes what. 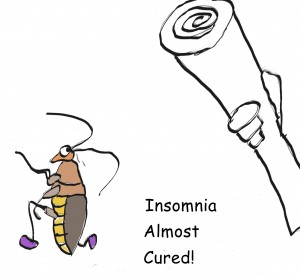 Sooner or later everybody and everything has insomnia.  Even the cockroaches in our house have insomnia.  They must be nocturnal because I never see them during the day.  But at night, they’re out. Everywhere…the kitchen, the dining room, under the table. Eating.  Carousing.  So many animal urges. And I feel guilty because we are enablers.  Enablers because we are such sloppy eaters.  And then there are sounds, the skittering and squealing, coming from the kitchen.  The thought of cockroaches having sex in my kitchen keeps me awake all night.  You could say  cockroaches cause insomnia…

I know they do.  I’ve seen cockroaches  give Howard fits of insomnia.  He has special hearing.  He can hear insect sounds from far away, even from inside our bedroom with the door closed.  He also has super dooper vision.  He can spot an ant a mile away through a closed door.  I think he has X-ray vision.  But he’s not very stealthy and when he is lurking around the house, rolled up newspaper in hand, he steps on things. And yells.  A lot.  No quiet for the other insomniac in the house.  Not that she would be sleeping anyway.

And then there’s that final lunge and lurch, the smashing impact of the newspaper roll, followed by splatter noises.  Cockroach entrails fly all over.  It’s hard to sleep through that.  And if you don’t watch where you walk,  you’ll be up all night scraping cockroach parts off your feet. 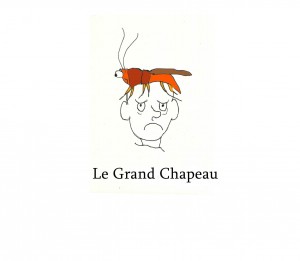 The dog has insomnia too.  Her given name is Pookie.  She roams the house all night long. I can’t use auditory commands to stop her because she doesn’t hear.  She’s deaf.  She was that way when I brought her home from the rescue shelter.  Telling her to go to bed is like talking to the wall.  I guess the walls are up all night too. I talk to them a lot.  I’ve changed her name to Nocturnal Dog.  Maybe calling her Insomnia would  be better…