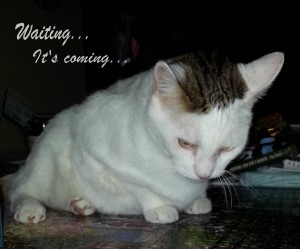 Going to lose a big one…

Tonight was an interesting night.  I fell asleep early.  Out in the living room as usual.  In my favorite chair.  I was dreaming away, but I didn’t know I was dreaming.  The dream was so real.  I was in the kitchen, whose kitchen I don’t know.  It was just a kitchen, some kitchen somewhere that led to a pantry. A long pantry. Howard was in another room sleeping.  It’s what he does best at night.  Sleeps the night away while I sit up trying to determine how many letters there are in insomnia.

Anyway…I went into the pantry which was fairly narrow. It led to an open back door.“Hey, Howard, you left the back door open,” I groused.  “I’m going to have to close it.” And then I sensed that I wasn’t alone.  There was somebody else in there with me. And that somebody wasn’t Howard.  The somebody was at the pantry window, trying to let someone else in.

I tried to exit the back door.  I was screaming but my screams were headed for my large intestine.  They were not enroute to my mouth. I tried screaming harder.  “Hrrgghh!   Hrrrgggghhh!”  All I got was guttural grunts, half-muted with fear, like a cat trying to hurl a hairball that won’t come out.  And then I went for it, the big one.  With all my might I pushed wind through my vocal cords and let loose with a big whoop.  It sounded something like, “Hhheelllgggppp!”  And it was really loud, so loud it jolted me out of that dream and  back into reality which, thank goodness, was just me making noises in the living room.

Fortunately, there was no one else there with me. It was embarrassing.  But on the other hand, I learned something from this.   That is, if Howard stays in bed, and doesn’t come out to see what’s going on, I could be throttled out there, in my own living room, in my own house, and no one – including Howard – would be the wiser of my plight.  A lot of good living with him does me.

But, what if he did run out into the living room to see what was wrong? How would I, supposedly a sane adult, explain to him my misdirected bellowing? I guess our conversation would go like this:

Howard: What’s wrong with you? Are you having a heart attack?

Howard: Then why the hell are you screaming?

Me: I was conducting a study.

Howard: A study?  What are you talking about? Don’t you know what time it is?

Me:  I was just checking your emergency response time.

Me: Yeah. I just wanted to see how fast your royal rotundness could make it

out here if I needed you.

Howard: You know something?

Me: Like  I know that you don’t move very fast when you are half asleep.

Howard:  You are one wacky woman.  I must be crazy for living with you