Just Passing Through by Maggie Millus 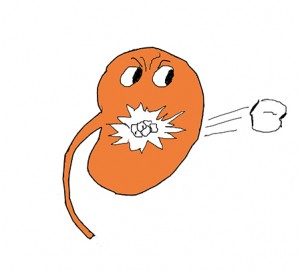 This week I had an important reminder that I was not immortal.  One of  Murphy’s Laws  hit me right upside my head: “If everything is going right, you must have overlooked something.” The reason for all this rumination: I had a health issue.  Now it didn’t kill me, but for a while I thought I was going to die and I may have even wished I could.   All because of kidney stones.

For the last two weeks, I was outside being a typical Florida homeowner which is a yard person with sex privileges.  I had a lot of energy and not much sense.  I was doing yard work, everyday.  Everyday due to the recent rains.  The grass was growing at a rate of 6 inches a day.   I could actually sit and watch it grow.  Kind of like watching paint dry but nowhere near as messy.  I ended up mowing the yard over several days-several days because it kept growing back like nose hairs.  Or ear hairs.

At the same time, the shrubs were doing their thing.  They were reaching for the sky.  And  getting overly friendly with each other.  Their branches were interconnecting, touchy feely style.    I was watching an impenetrable jungle form.  All in my yard. So I dealt with all the botanical chaos the only way I knew how: mower and machete.

I worked out there in the heat for hours.  Sweating because extreme  heat plus sun  equals perspiration in buckets.   But I was feeling great.  Nothing like the warmth of intense heat to lose aches and  pounds and your mind.  I lost two pounds by the end of each cutting session. I felt so good that most of my rehydration was done in the shower. But I forgot to drink enough water to maintain a healthy water balance.  Result:  kidney stones.

I don’t remember swallowing any rocks.  The pain in my side started in the morning.    By afternoon, I was in the hospital.  Actually, I started having lower back pain the week before but I just assumed it was decrepitude.   The back pain went away and a week later, I had something called renal colic and kidney stones.

I was told I didn’t rehydrate enough and I’ve been eating too much spinach. I built up a load of chemicals called oxalates.   The excess oxalates and the lack of water precipitated  stone formation.  Now I have to drink water, all day long.  I think I’m going to float away.  I even have a tidal surge in my gut.  The next full moon is going to be interesting…

My diet is restricted.  I spent two days in the hospital on a liquid diet.  I was so hungry I thought my stomach was going to eat my throat.  As for restricting oxalates in my diet, that makes me miserable too.  All the healthiest foods have oxalates.  No spinach, no kale, no red beets, no chocolate.  Oh misery.  No blueberries, blackberries, or raspberries.  The only good news, no rhubarb. (I really hate rhubarb.)

I think I’m  back to normal. With the exception of flooding myself with water.   I haven’t forgotten the pain of passing the stones and they’re still running tests on me.  I think I finally realized why I don’t like going to doctors. There’s not an opening they don’t look into.  I think dark holes are their specialty. But they did stop the pain.  Thank god for painkillers.   At least it wasn’t a bowel obstruction.  With one of those, your stomach swells up like you swallowed a basketball.  The obstruction is brown, just like a basketball,  and it’s very smelly when the obstruction is removed.  Lucky me.

In the meanwhile I’m staying out of the heat.  If the yard turns into a jungle,  I’ll just pretend I’m surrounded by a rainforest.   I could pretend I live in southeast Asia.  But who’s going to do the yard work?  Maybe I’ll get some goats.  A jackass may be helpful.  There’s always plenty of those around.

Although I now have no pain,  I’ve become sensitive to certain expressions or idioms.  Like I don’t want to hear “a stone’s throw away”  or “just passing through…”  “Chock full of nuts”  really hurts.  Makes me want to go grab another bottle of water.  No point in taking chances.