Life, The Universe, and Insomnia by Maggie Millus

Life, the Universe, the This and That of Everything,  came crawling into my mind in the middle of the night tonight.  Another bout of Insomnia.  I’ve been up all night.  Thinking.  Thinking about Everything.  All night long, every nanosecond of wakefulness.

There are so many things to think about, some of them nostalgic, some worrisome, others downright foreboding.  Like dying.

I don’t know why I would waste sleepful hours of a good night thinking about dying, except that I’m a person who likes to plan ahead, and with death, there is no ahead.  No future.  That’s it.  Kaput!  It’s over. And that bothers me.

I can’t help thinking about all the possibilities.  No, that’s not a good word, because when you’re dead there are no possibilities (as far as anybody knows). But, on the other hand, nobody knows anything about what really happens after anyone or anything takes its final breath. 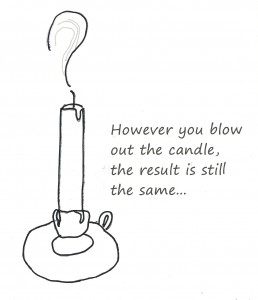 I’ve considered the possibility of an afterlife…lots of religions say there is one.  They say there are alternatives, like  Heaven or Hell.  But they don’t really know.  Somebody, several millennia ago, came up with the idea that it would be more comforting to have a belief that, after that last breath, there would be something else.  That things wouldn’t go dark, that life wouldn’t be snuffed out like a candle flame. No consciousness.  Nothing.

The Big Nothing…  That’s hard to think about.  Almost painful.  Especially when you’re awake in the middle of the night in the dark.  The darkness of the night makes it seem very likely. And it’s definitely not comforting.

The thought of something else like an afterlife, especially Heaven, is more tolerable. It almost makes a person look forward to dying.  “I’m going to go to Heaven when I die!” sounds so pleasant, so emphatic. So anticipatory.  So optimistic!   It’s like we all (okay, not all of us, definitely not all of us, and according to some people only a select few) are going to have a good and better time after we’re dead.  As in, “He’s in a better place now.”  I guess we wouldn’t say that if we thought there was nothing but nothingness after death. But, if you’ve had a life of pain and misery, I guess nothingness could be better.

But I still don’t know if there is a heaven, hell, or just plain nothing.  I’ve thought about reincarnation.  But that’s not so good either.  I’d have to start a life all over again, from the beginning, as a brainless baby.  Speaking of…

What if I were reincarnated into the body and mind of a stupid person? But then, if I was stupid, how would I know the difference?  Do stupid people know that they are stupid? Or would I be one of those child reincarnation phenomena –a prodigy but still stupid-  who can spout information from a past life, one beyond their realm of consciousness?

I can see it now.  Me, in the body of a prodigious 4 year old, balancing chemical equations, a fricking stoichiometry genius!  And there would be my family, standing all around me, google-eyed, not understanding the causes of such utterances.  (Because of the direction of time, I always think about reincarnation as occurring in the future.   If I could reincarnate back into the past…such exclamations probably would get me burned at the stake. There’s nothing like a little hint of possession to get a person into a lot of trouble!)

But none of that will happen.  It’s all a dead end, no pun intended. Am I sure?  No. Because I don’t know what does happen after we die.  Who does know? Nobody!  Noone has ever come back from the dead to tell about it.  And yes, I know there are all these “paranormal” investigative TV shows, but I’m still a skeptic.  For all I know they are staged or if they are some form of reality, they are just wandering into holes in the warp and woof of time.

So what is there?  Nothing?  Reincarnation?  Heaven?  Hell, I don’t know. Actually I’m hoping for Utopia. But being the realist that I am, I know  that will never happen. So I guess I’ll just stay up and worry about it.