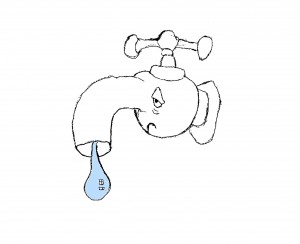 There is more than one drip in the house…

Men!  I’ll never  understand them.  They want to live in nice places, houses, whatever…but they never want to do the upkeep.  The house may be falling down around them but they always have a reason for not fixing things, not taking care of the yard, not cleaning out the car… You name it! Sometimes they don’t have a reason.  But reason or not…whatever needs care is just not going to get it.  Unless…

“Howard!” I say to my preoccupied spouse.  He’s busy.  Busy doing something important to him, something of high level importance.   Like watching marathon rerun episodes of Swamp Thing.

“The bathtub faucet is leaking,” I grouse.  Not that it just started leaking.  This has been going on for two years.  First a slow leak, just enough to grow enough mold and make a “swamp thing” of our own. Then a stronger leak.  The cats were overjoyed, they thought they had a fresh water stream.

Now the leak is about to become a moderate torrent and we will have to put out sand bags.  “Howard, I don’t want to nag, but would you please fix the plumbing?”  No reply.  Some times I get lucky.   I’ll get a grunt, which I used to assume meant  an optimistic “yes”.  Now I know, it just means gas.

Begging doesn’t help; so the only artillery I have is the threat. The threat of having to pay someone else for something he could do himself.  “Well, I guess I will just have to call a plumber.”

Now this is a small threat, because this time he will reply.  “Why should I have to pay someone else when I can fix it myself?”   Hmmm…fix it himself….  I know he can.  But he won’t.  So when?  Not until I come up with an even bigger threat, like,  “Howard,  the tiles are falling off the wall.  I’ll call a subcontractor and we can get the entire bathroom remodeled.”   Flowing through his head like that leak from that bathtub faucet, from one ear and out the other, is the thought that someone else will fix something in his house…his house…and he will have to pay them!    I have hit pay dirt!

Then he says, ”You know, we have to take measurements.”  Hoorah.  Finally.  He’s talking bathroom repair.  I’m so happy I could jump up and down. Remodeling here we come.

He continues…”Then we do the tear out and find out what we really need.”

I really hadn’t planned on getting that involved.  I had visions of shopping at the mall while he worked on the bathroom.  Now I’m beginning to worry about this DIY project. There’ll be two dozen trips to Home Depot. And not one trip to the mall.  And what to do about the ripped out tile?  Piles of the old wallboard?  Where are we going to put it all?  In the living room?  I don’t think so.

Besides that,  Howard  hates plumbing.  And what about the bathtub?  What a mess when we rip the old one out.  I think we should reglaze.  But he wants a new tub.

“Well, you wanted to remodel the bathroom.”

What an ordeal.  All just to fix some old tiles and wallboard around the tub.  To make it look nicer.

So.  Three months later… Was the final outcome worth it?  I don’t know.  It never happened.  Not yet anyway.