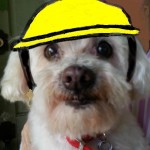 It’s a little after midnight.  I tried to sleep but I can’t.  And neither can the dog.  The house is dark and I hear her crashing into things.  It wakes me up. I think she sleepwalks at all hours of the night.   But I have a flashlight.  So I don’t crash into things.  And I don’t sleepwalk.  Not that I know of.

Being up by myself gives me lots of time to think.  And worry.  There are lots of things I can worry about.  Worrying is the one thing I am good at. Sometimes, I worry about serious stuff.  Like why people are always trying to kill each other or I worry about health issues. I could get a job as a hypochondriac  – if there was such a thing.  But most of the time, I worry about idiot things, like why is the dog barking at the wall?

Someone once told me I had cherophobia (abnormal fear of being happy.)  I told them I would never see a shrink, I’m too well-adjusted.    It’s just another one of Murphy’s Laws, in other words, “If everything is going well, you have obviously overlooked something.”

There is always some nasty thing or event around the corner.  I know it’s going to happen.  I just don’t know when.    Usually it’s something that I didn’t anticipate.  Like all that gas I got after eating cheesecake last night.

I should have known better.  I am lactose intolerant and I was all out of Lactaid.   But…well… it was a small piece of cheesecake. So  I asked myself, how much harm could it do? But I didn’t get an answer.

I considered the distinct possibility of an explosion. ( I’m sure intestinal gas under high pressure can explode.   After all, I once saw it in a Monty Python movie. ) And if I did explode, who would do the clean-up.? Certainly no one I know.

I worry that my gall bladder will go out.  That it will stop working and shrivel  to the size of a pea.  Then what?   How am I going to eat all those French fries?  If my gall bladder’s hard as a rock, will I make like a chicken, laying gall bladder stones instead of eggs?

I can gain 3 pounds in 2 days just by breathing the aroma of cooked food. By the end of the year, with that kind of weight gain, I could….collapse any bed.  Surgeries would be out.  Even an appendectomy  because no surgeon could find my appendix through all that fat.

And I could never be a pole dancer.  I would bend the pole or maybe even rip it out of the ceiling.

Social interactions can be a nightmare.  One faux pas and you can torpedo a friendship forever.  I ran into an old friend.  She had just had a baby. It wasn’t just any baby.   I looked at it.  I couldn’t stop staring… it was ugly. I know, most people would  have ignored that ugly baby because they wouldn’t want to hurt its mother’s feelings.

Babies aren’t supposed to be ugly.  They get ugly later, when they grow into adults.  But I just had to know why that baby was so ugly.   “Is your baby sick?” I asked. I thought maybe it had a bad case of diarrhea.  Everybody makes faces when they have diarrhea real bad.  My friend (ex-friend?) just stared at me. And then she walked away.   I guess  she gets that a  lot.

The dog is walking around the house again.  It’s 3 AM and the house is pitch black.  She’s crashing into things.  Tomorrow, I’m going to buy her a helmet.