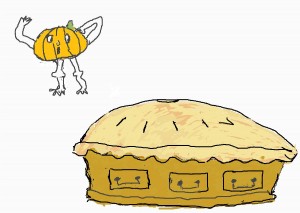 Halloween’s been long gone for almost a month.  It was just another Halloween, a Halloween spent trick or treating with my sister-in-law’s kid.  He dressed up as a pirate and me, I went as an aging adult.  “Do ya have to look like that?” he complained.  “Listen kid, I am what I am.  Besides, what do you want, a frog?”  Then I  clutched my goody bag, actually a grocery bag, and we stomped off to beg  for candy.

Somehow I managed to come home with a lot of candy in spite of the skeptical looks I got from the neighbors. “Aren’t you a little old for this?” they asked.  “Nah, ” I replied. “You’re never too old for indigestion.”  Then I took the kid home – I even let him keep his candy (no candy “tax” this year ).  “Eat as much candy as you want, kid.”

I ignored him.   “Here, have some more,”  I said as we rounded the corner.  “It’ll help your mother sleep.”

Then I decided to go home and stuff myself with my candy.  Just me, the candy, and a bottle of merlot were gonna celebrate this one together.  I must have really been tired because I dozed off right after consuming all that candy and wine.

It was just a dream or maybe it was a diabetic stupor,  but I woke up  standing at the entrance of a cemetery.  The sign on the gate read “Dead End” and I didn’t feel right. As a matter of fact, nothing seemed right, but I kept on going until  I finally entered  a small, dilapidated building.  Then I began to wonder if I  was dead.  I guess it was all the candy I ate. I really felt like dead and maybe all that sugar can kill.

Cobwebs and dust were all over the place. It looked  like home.  But there was no technicolor  and something smelled really bad.  Could have been me.  Decomposition? Or bad flatulence from all that wine?

I passed by a  concrete angel and tried not to notice its missing head.  A bad omen.  My mother always told me I would lose my head if it wasn’t attached.  But , thankfully, I’m no angel.   I saw a mirror. It was one of those ornate things with flowers and cherub carvings. I looked into it and, boy,  I did look dead. Like Alice Cooper.    Maybe it was the wine or maybe it was just the shroud I was wearing, or  the runny eye-makeup.

I heard voices from further in. I couldn’t see for shit because it was so dark but it was  Howard and an under taker. The building was a mortuary and they were doing something to a casket…

“Hey, Howard, let’s get  the hell  out of here!”I yelled out. “This place gives me the creeps!”  He wasn’t listening. How typical. But neither was the undertaker. Nobody  heard me.  I guess when you’re dead, no one can hear you scream.  I waved.  I jumped up and down.  When my right foot passed through my left foot , I finally got it.  I was ethereal and Howard can’t fix dead.

Undertaker: She certainly is.

Undertaker:  Of course she is, sir.  All our clients are dead.

Howard:  I told her not to eat all that candy.

Me:  Enough already. Stop saying that!

Together they lowered the casket lid, but it wouldn’t close.  They tried again and again.  The casket stayed open.

Howard:  No.  Maybe it was the potato salad.

Undertaker:  I’ll get a saw and a vacuum pump.

And then I woke up…for real.