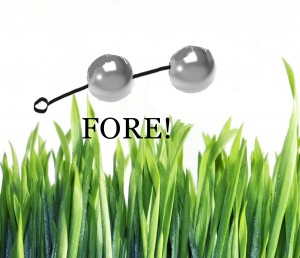 I read somewhere that it’s possible to sneeze out Ben Wa balls… those metal balls that can be inserted into the lower orifices of your body for therapeutic or other purposes. I can’t imagine doing this – the insertion or the sneeze. I would think expelling one with a sneeze would be hard to do. Ben Wa balls can be as small as a marble. It would be like shooting at the floor with a pea shooter. Fire away! Just watch out for the bounce…and don’t leave them on the floor for someone else to slip on.

On the other hand (no pun intended) – if you had one of those bigger versions and they do have them in 2 inch sizes or bigger, it would be like launching a golf ball. Maybe you’d better yell “Fore!”.  As for getting hit upside the head with one, that would be hard to do and even harder to explain…As in:  “I got this black eye when my head fielded a 40 mile an hour Ben Wa projectile.”

I wonder if there are sneeze contraindications on Ben Wa Balls… 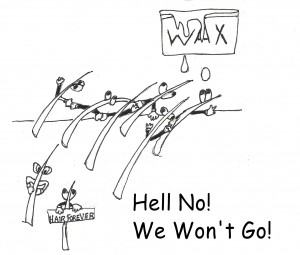 Maybe some people like to sit butt naked on slick vinyl…or maybe they just like things smooth. but with hirsute overgrowths, no one can do that without going to a lot of trouble…

Consider a body wax… Skin has a scazillion nerve endings. The nerves surround the bases of the hair follicles. Pulling one hair hurts almost as much as a bee sting. Coat a bushy back with hot wax, no matter how fast you yank, you will still administer a thousand hurts. Or maybe I should say Hertz, because your yell would be about 1600 Hertz-in other words, about 5-7 times that of the normal human yell.

Translate this into decibels, the conclusion is still the same. There’ll be a helluva lot of yelling and it will be loud, very loud. Maybe even loud enough to make your ears bleed. I know this is true because my niece told me so. At least that’s what she claims happened when she waxed her brother’s very hairy back. It’s going to be a long time till her hearing is restored, and I bet her brother will never do that again. 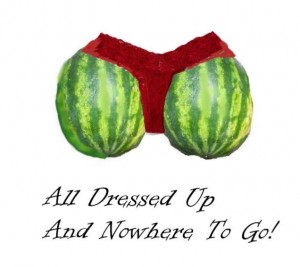 The other day I was helping a friend clear out her garage. We were throwing out clutter…. you know, that plethora of useless stuff that always accumulates in a garage. As I was carrying out an old horse blanket (she doesn’t have a horse), I noticed a makeshift clothesline. Nothing hanging on it except 3 lace thong underwear. There they were, three dainty pairs of very suggestive lace panties. Two red and one black, And they were hers!

Now I want to know, just what makes a person with a supersized butt want to wear these things? Better yet, what makes anyone want to wear thongs? There’s a reason they call thongs “butt floss”.What happens if you lose one and can’t find it to get it off? How do you say to a doctor, “I have a rash because I lost my thong…”. And even if you’re skinny, on a hot day there is still the likelihood of a surgical excision.

Indiscretions…mistakes, poor choices, bad ideas…body waxes, Kegel balls, butt floss… Whatever they are called, some things are not worth doing!