Every day there is another news release touting the results of health and food inspections on local restaurants.  No failure is spared.  Bacteria crawling on the counters?   Cockroaches?  A fingertip in the linguine? Raccoons barking under the freezer?  You’re gonna get  a violation.  And  a shut-down.  And then you’re going to be on TV.

Me, personally, I’d never allow a food inspector in my house.  Not even with a court order.  They are the last person on earth who should see the inside of my refrigerator or stove.  If they did, they would be back with more than a violation.  They would need  a net or a snare, maybe even a flame thrower.   A hunting rifle might be a good idea too, but no AR-15’s please.  Somebody could get hurt in all that fracas. And I’m too lazy to go buy Spackle to patch up all those bullet holes.

A kitchen inspection  would  get me a big sign on my front door.  The notice would be at least 2 feet across.    And in 5 different languages with big, bold letters:  Cerrado! Ferme’!, Ausbleiben!  Maybe in Swahili, Kufungwa!…or whatever.  In any language, it would say:  Closed! Closed! And Closed! 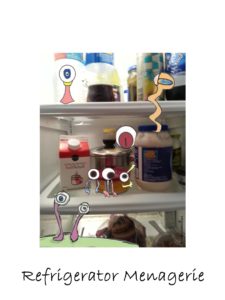 To clean up, I would have to order a Hazmat suit.   All because of the refrigerator and the stove.   Maybe I should just  ignore the refrigerator. No reason to risk life or limb.  Cold temperatures keep things dormant…At least small things.  Something big that should ordinarily die after a long period of time just stays moist , waiting, lurking under the meat cooler. And it knows when you are coming for it.  Temperatures above freezing are not  low enough to stupefy that summer sausage . And it’s swelling, growing, getting bigger.  Somebody go get a pitchfork and a shock collar.  You may as well give it a name, like Zeuglodon!

The oven is supposed to be self-cleaning but I’ve never seen it once pick up a sponge, shovel, or even a paper towel.  And then there’s the summer heat, who wants to ramp up the oven to 900 degrees (Fahrenheit) and  turn the house into a spa?

The entire stove is a forensics expert’s nightmare.  It has no bodies or mummies, just cremains.  I suspect that there’s some kind of monster lurking in it too, one that is not heat-labile.  Even the cats won’t go near it.  And then there are the noises…not rats or poltergeists, more like grizzly bears.  I can’t help worrying, What if it attacks me first?  Somebody get me a spear!

There’s a lot of ash in the bottom of the oven, too.   It’s a veritable crematorium.  If I sort through the ash, I can find insect parts, usually legs.  I don’t know where the wings go…they probably have flown off to insect heaven, if there is such a thing.  I can imagine a cockroach telling St. Peter, “I was just ambling through, looking for food when I slipped on some godawful drippings and ended up on this escalator to Heaven.” 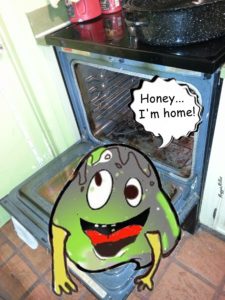 There’s sticky stuff on the oven bottom.  It gives the oven floor a gritty,  shiny look.  I don’t know what it is. Could be ectoplasm but I think it’s food for whatever wildlife that comes along. Maybe it’s alive too, because it likes to suck the fibers off of paper towels when I try to scrub it off. I got my hand in it once, but only once.   I thought I would  be stuck there forever. Some days  I worry that it might crawl out of the oven, like a giant amoeba. I could get digested whole, like the actors in that Hollywood movie, The Blob.

Who’s going to believe me  when I yell for help?  I should warn the food inspectors, but I don’t think they will understand.  If I call my husband, Howard,  he’ll just say, “Excuses, excuses.  You just don’t want to clean the kitchen.”   And then nothing will change, it will stay just like it’s always been.