Way To Go by Maggie Millus 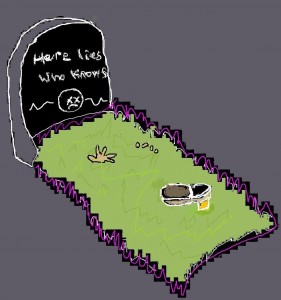 One foot in, one foot out…sole facing heaven.

I woke up feeling morbid today.   Like I had one foot in the grave.  All because I woke up in the middle of the night and couldn’t go back to sleep.  I  had fallen asleep watching Channel Nada, Worthless TV.  When  I woke up, my addled brain began chasing lethargic butterflies of insomnia… Or maybe they were dragonflies.    Anyway, I just sat there.  In the living room.  In the dark.  For hours…

I channeled my groggy self into an awful mind  rut of worry… about things I have no control over and don’t like to think about…like dying.  I worried that, one of these nights, I might croak in the middle of the night. I was digging myself deeper and deeper.  Out there.  In the living room.  In the dark.  Just  me and  the dog.

What will it take to get my somnambulant spouse, Howard,  to find me?   A trip to the refrigerator for a late night snack?  Breakfast?  Will he  even notice?  Maybe the dog will tell him.

When Howard sees me stone cold, will he even know the difference? Maybe he’ll just get me a blanket and tell me I look a little pale. Then what?  What if I turn blue? Will he turn on the heat?  Or just get another blanket.  Maybe I’ll just look pasty (especially after the undertaker slathers on embalmer’s putty…)  And how long do I have to sit…or lie there before I become a bonafide stiff?  Is it easier or harder to move a stiff? Way to go, rigor mortis!

And then there’s the ultimate indignity…loss of bladder control.  What’s the use of all those Kegel exercises if you can’t hold it in the end?  Maybe I’ll be lucky and Howard will think the dog did it (again).   Did somebody say intestinal disfunction?? Like my bowels will be unloading  harder than a grave digger shoveling dirt? Say it isn’t so.

Afterlife?  Hmmm… sounds optimistic to me.  Something to look forward to. There must be some invisible dimension somewhere, up there.  Or is it out there?  Is it Heaven?  Hell?  If it’s hell, maybe it’s down there.  And who else is gonna be there? Seems to me it will be verrrrrry  crowded considering the billions of people who have lived and died.  At least they won’t be driving cars.

How about people I don’t like.  If I didn’t like them the first time around, how’s it gonna be the second time.  Heaven?  With THEM?  I don’t think so…So what if they do have an entitlement to Heaven.  Forget it.  I don’t want to see them again.    (See???  Who am I kidding? With what?) And  it would be a special kind of hell if I was  stuck having to be around  stupid people.  Idiots.  Dummies with single digit intelligence.

Do the dead linger? What if I can’t see the light at the end of the tunnel?  I could go to a séance and find out.  It would be worth the drive.  Séance? What am I thinking? Is there even such a thing as a credible séance?  And who the hell would I talk to?  My irritable, cantankerous, tired of waiting mother??   I can hear her now, “Everything I did  for you, and this is what I get…You never talk or call anymore.   Not for 10 years.  10 long years….”. That’s it!   Dead for 10 years and she’s pissed off.  Then she’ll scold me  saying, , “Where’s that husband of yours?”  To which I’ll  reply, “Getting me a blanket, Mom.”