I didn’t feel funny today.  No humor.  No sarcasm.  Nothing.  It was just one of those days.  You know, when you don’t want to do another thing and  you just  have to get out of the house.   Since this is South Florida, I didn’t have to worry about snow, and it wasn’t raining.  It was a little on the warm side, but other than that,  it was simply a gorgeous day.  A good day to walk in the woods.

There aren’t a lot of woods left in South Florida.  And there is even less remaining of  “scrub”. “Scrub” refers  to a plant community … a pine woods habitat characterized by short needle pine, oak, palmettos, and other runt plants living on white sand.  They are runts or scrub because of the nutrient poor and dry soil they live on.  The scrub habitat is harsh with a limited number of plants and animals living there.   The following photographs  are from the Yamato Scrub, a fragmented remnant of scrub adjacent to an area of light industry in Boca Raton,  Florida. 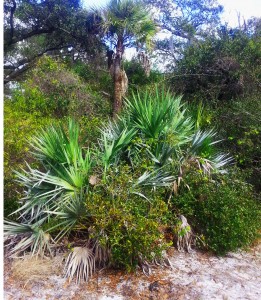 Yamato Scrub. Saw palmetto with live oak and sable palm in the background.  The soil is white, coarse, dry sand.  There are several different kinds of oaks in the scrub.  They form the base of a complicated food chain. Palmettos are bee and insect pollinated.  They are a source of food for many animals such as raccoons and opossums. 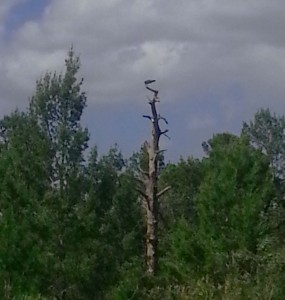 Osprey at the top of a dead pine. Ospreys typically live near water.  The ocean and  a canal are nearby.   A family of ospreys has lived in this scrub for many years. 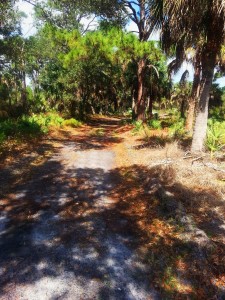 Dirt Road.  I like roads, especially dirt roads.  I will follow a single lane, dirt road anywhere.  There was no traffic on this road. The pine in the background is slash pine, a long needle pine found in other pine flatwoods. 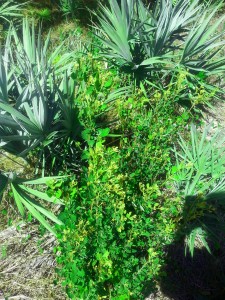 Tarflower.  Named for its sticky pink flowers.  The floral parts have hairs which secrete a sticky substance.  Insects are trapped in the sticky and unable to steal pollen.  Early Florida settlers once used tarflower bouquets as “fly paper.” 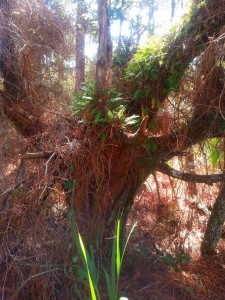 This is resurrection fern.  In dry weather, it curls up and appears dead.  When the rains return, it resumes its green vibrant appearance.  This one is living on live oak. 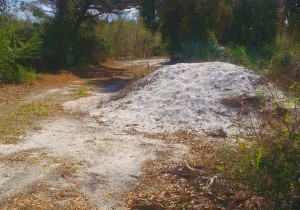 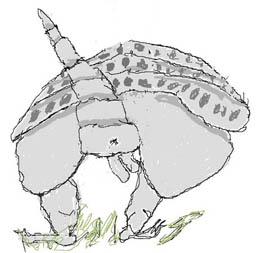 Flodillo.  Guilty culprit?   Armadillos dig sand piles but not as big as in the previous picture.  And no, armadillo testicles do not hang loose.

Unlike my other blogs,  this one was not intended to be funny.  Now if you don’t think any of my other blogs are funny…No comment!