Brain On Squirrel by Maggie Millus 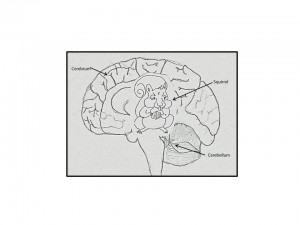 Today,  the mail brought an advertisement from a prominent medical bulletin.  I won’t say who it was, but you’ve probably received at least a few, if not too many.  They always arrive with some great reason why your health depends on subscribing to their newsletter.  You know, how you can cure constipation, lower blood pressure, and look younger by eating  10 pounds of cabbage everyday… Or how you can cure facial flab and wrinkles with hemorrhoid cream.   The reasons go on and on…

Today, the urgent reason for subscribing was dressed  in a big envelope with a blue  and white banner  that  screamed at me : “What’s YOUR risk of developing dementia?”   I considered it for a moment,  then I thought,  dementia, just exactly what is dementia?  It sounds pretty bad, like your brain and mind are in a major train wreck with reality.

References, online or otherwise, say that demented implies a person has lost one or more mental abilities, such as memory.  Memory??  If I forget a name or face, am I demented?  What if the only name I can think of is “jackass”, am I  demented or just hostile?  If I can still name a lot of people whom  I wish I could forget, have I avoided dementia? And besides, how many faces and names should I remember over a lifetime?  Is it a matter of degree or convenience?  I’m certainly not going to buy gifts for relatives whose names I can’t remember.

How about forgetting the past? I can’t remember and don’t want to remember all of the crap in my life.  And besides, I never was good at the subject of history.   What about selective memory?  Is it dementia  if I can remember how to calculate photon velocity but then I get my cats’ names mixed up? (I have three of them.  Having three cats, however,  may also be evidence of dementia. If you have  four or five, you have really lost it!  But maybe that’s just being eccentric?)

Is  misplacing your car keys dementia?  Do misplaced keys or misplaced anything for that matter mean you are not quite all there??  What if the misplaced object had legs of its own?  Your husband moved the remote, you  can’t find it, and now he hints that you are also missing something in your head. Or is your brain really totaled when you have to ask, “Keys?? ? What are those?”

Which  human misbehaviors constitute dementia?  What if your brain and perspective are scrambled, and  you have imaginary squirrels running through your brain?  Or maybe other cognitive or  behavioral issues such as dyslexia and ADD (Attention Deficit Disorder).    Are these behaviors dementia just because they are awkward or  because they disrupt  the daily routines of those around us?  Maybe ADD and causing aggravation in others have adaptive values.  Consider human evolution.  Running around like a squirrel from place to place would have protected  you from predators because you never would have done  the same thing for more than 15 minutes.  You would have lived longer.

Dementia.  Should l really care?   I mean, how much is dementia really going to bother me?  If there is no pain, fear, or harm, then I would say it would affect only those I closely associate with. Family… Relatives…    But they deserve it.  From my perspective, I’d finally be able to get even with them by driving them crazy.  I could make up for all the things they did to scramble my reality.  When I look at it that way,  maybe dementia’s not so bad. On the other hand, if you are the one who has dementia, forget it.  I’m out of here!