You read about all those good things that writers should do to be productive.  And then there all the things a writer shouldn’t do, bad habits that lead to non-writing.  I have brought a lot of non-writing on myself through these bad habits.

I have a book to edit, a humor book. Humor-because it’s supposed to be funny.  I did two edits one after another. Well, almost one after another…I’m not that efficient.  Then somebody said let it sit for a while, to gain a more impartial perspective when I did the next editing.  So the book sat there. And now, I hate it.  Well, almost. It just doesn’t look very inviting or funny.  It’s almost as if I’m reading something somebody else wrote.  For the third, fourth, and fifth time.  Soon I’ll be able to memorize it word by word. 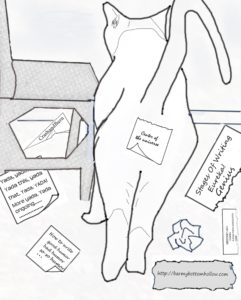 I know, I should have set up a timeline.   It seems like a good thing to do when you have a major goal.  But while I waited 6 months to do another edit, I managed to develop all of these other side projects.  My brain has always been ripe with creative ideas.  I get too many of them.  They wash in like the tide, and pretty soon I am knee deep with a finger in every pie or maybe I should say, a toe in every runnel. Too many side projects can be confusing. Maybe even lead to dementia.

I thought of making a story map. Aka graphic organizer, concept map, mind map… Anyway, a chart with a central point and smaller lines coming out of it. I could put it on a big whiteboard, better yet use an entire wall. The use of hierarchies or subgroups could keep me organized. If I did this, I might even be able to finish all those side projects one-by-one, assembly line style.   Or maybe I could complete several projects simultaneously.  Finishing multiple projects at the same time? Now that’s productivity! But that’s not going to happen.

I enter all my work on a computer.  Thankfully, on just one computer.  But I’ve set up so many files with so many subfiles, I can’t remember which ones I am working on and which ones I’m not. And often times, I can’t find the file or subfile I am looking for.

New ideas keep coming. I write them down.  On pieces of paper.  Often in the middle of the night. Sometimes I dream story plots.  I get up and write them down and anything else I can remember.  But if I don’t enter that nocturnal inspiration into the computer by the next morning, the idea lays around on the dining room table or somewhere else that’s flat, like the floor.  I swear some pieces of paper even have legs.  I have to hunt them down, like small game.  And it’s hard to remember what you wrote on which piece of paper.  I should have a file or a drawer, where I could stuff all these pieces of paper.  The problem is, once you forget about a piece of paper, it’s as if you never wrote on it at all.

And then there’s my perfectionist syndrome.  The syntax has to be just right, the punch line a good hit. I want my  blogs to be smart, clever. I’m 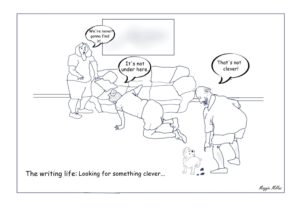 always looking for  “clever” , that funny metaphor or maladjusted foible. Sometimes I look too hard. Ideas seem to momentarily lurk around in my brain; then they get lost and I never see them again. In my brain, it only takes an instant for a word, sentence, or idea to disappear if I don’t write it down.

Motivational experts say prioritize.  I do. First thing in the morning, I set up my day. But procrastination and distractions sabotage my best intentions and besides, I’m also very good at ignoring things – like priorities.

All these bad habits create mental pressure and the mental pressure is always there, standing on the toes of its ugly step-brother, self-doubt.  So many issues, so many concerns and they are not always about the quality of the written word.

I’ll keep writing.  They say persistence pays off in productivity, but first I’ll have to overcome my own bad habits to make it pay.