Today Howard and I had fried chicken for lunch.  We both had our usual 3 pieces and ate them without the skin. I never eat chicken skin.  I have a gall bladder that takes no prisoners.  Besides, I don’t like lining my arteries with fatty plaque.  So anyway, no gastronomical issues occurred.   At least for me.  On the other hand, I can say that Howard’s intestinal microbiota probably vamoosed themselves… all the way to Tijuana.

After lunch, we drove down to Adrian (Georgia) about 30 minutes away from where we were staying. The trip there was lovely, lots and lots of greenery, thickets, trees, woods, along the roadside and beyond. We made a short, perfunctory visit with his brother.  You know the kind- pleasant, congenial, glad to see you, and a joke here and there.  Followed by a quick goodbye, see you soon.

On the way back, I noticed Howard was speeding, driving faster and faster, pushing hard on the speed limit with a heavy foot.

“Why are you speeding?” I asked.  “I bet there’s at least one patrol car behind the trees.”

“There’s something wrong with the chicken.”

“Well, you can always stop behind some trees.”

But that’s not too practical. We had no toilet paper, just lots of Kleenex.  And what to do with all that Kleenex?  Bury it?  That’s not very environmentally friendly. Besides, we didn’t have a shovel big enough. I guess he could burn it.  But, what if you set the woods on fire because you wanted to get rid of your shit?  On Kleenex. 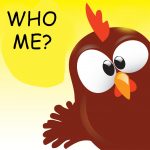 I watched him looking at the trees.  Longingly.  His foot was getting heavier.  “I can’t do that,” he says.“I’d be spraying shit all over the trees like a cat.”  I’m thinking, if he did, what would we do with his underwear…No toilet paper and things could get messy.  And then, coming home without any underwear….

That’s quite a mental image to take in.  And later, there could be people standing around the tree wondering what kind of animal did that.  It would probably take a lot of scraping and scrubbing to clean that tree. But who would want to do that?  Or conversely, who would spray shit on a tree like a cat?

At least it wasn’t a building.