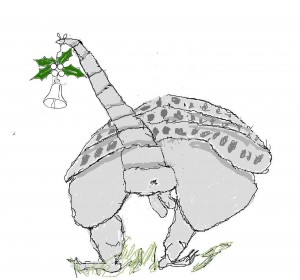 It’s the holidays  and we’re smack dab in the middle of them.  As a matter of fact, I can smell holiday peppermint eggnog breath everywhere  which tells me the holidays are really here and I’ve drunk too much eggnog. But where’s the tree?  I didn’t set up a tree.  Why not?  It’s Christmas time, but I just don’t feel like celebrating.  Why?  Because I hate December.

Bad things always happen to us in December.  This causes a lot of worrying on my part.  (Worrying is something I am really good at.  It’s up there along with insomnia and procrastination.)

I exaggerate my worries in December because I know if I don’t worry, I will get bushwhacked by disaster and inevitable catastrophe. The roof will collapse and the septic tank will explode, all because I didn’t worry and have obviously overlooked something.

I worry about a lot of things.  I could write a book about the things that I worry about.  For instance, I worry that I might find killer bees in my house, that killer bees have migrated 5,000 miles from Africa just to move into my attic.  That’s worse than bees in your bonnet.  They’ll probably be buzzing  “Deck the Halls…” and “For auld lang syne…” And then they’ll sting the hell out of me.

No colonoscopies this time of year either.  I’m afraid the doctor will slip and slide that tube clear into February.  I won’t be able to sit down for a month.  With my December luck, the sedation wouldn’t work and I would have to listen to him yell, “What is that?  Get the snare… Grab it!”

Company.  What if we have visitors?  Howard never worries about company coming.  Actually, I don’t think he worries about anything.  He’ll say, “Why worry?  Nobody’s coming.”  And then the hordes arrive.  And I have a dirty bathroom…

Holidays mean you have to clean the house.  Otherwise your company will demand  antiseptic hand towels, disinfectant, and antibiotics. And then there’s the refrigerator.   When I clean out the refrigerator, I’m gonna have to be very careful.  I’ve decided if any “thing” walks out of the refrigerator this time, I ‘ll just stay out of its way.  But if it leaps out, I’m gonna duck and run for cover!

Thank God Howard cooks.  He’ll cook and cook.  Lots of turkey and stuffing for everybody, even if it’s only the two of us and the dog.  This means plenty of indigestion.  This year, I’ve decided  when  I get all that gas and acid reflux,  I’ll self-medicate with the potato salad.  All five pounds of it.

Now I know I should be celebrating,  cheerful, and psyched.  The fantasy  is to be happy, love everybody, eat  lots of food, and give and get lots of presents.  Note-the key words  here are fantasy and happy.  You could also throw in joyful and optimistic.  But that’s not gonna happen and I’m not big on fantasy either. There are too many piles of reality  to step in around here.

And how am I going to keep everybody entertained?  We could sing Christmas carols, but I don’t seem to have a voice for that.  At least that’s what the neighbors keep yelling.

As for shopping,  I have no great love for Black Friday.  But oh, wait, that’s in November.  No matter.  It’s close enough to December. But I didn’t go shopping the day after Christmas either.  No sale is worth being trampled over.   I can see it now.  Howard is home alone and the phone rings.  He ignores it, like he usually does.  The answer machine clicks on, and a voice says, “This is the police department….we wish to inform you your wife has been trampled to a paste…We suggest you bring a bucket and a shovel…Maybe a spatula too…” And then I won’t have anything more to worry about.