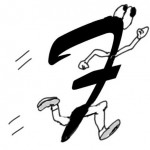 My household is adrift in a sea of F-words.   Not just  the most infamous of them,  but other F-words, like flustered, frazzled, and feculent.  But not all F-words are denigrating, some of them are actually distinctive, even cool.  Like fluorescent, flitter, fortune, fool-proof…  Fool-proof is one of my favorites.  I use that one a lot, especially when I want to finagle my husband, Howard, into doing something he doesn’t want to do.

Some days I am knee deep in F-words; they are so descriptive of what goes on in my family.  Family?  Hey, that’s another F-word.  One that causes me to use more F-words.  All the time.  Words like furious, flummoxed, furibund, fracas, futile… you know what I mean.

A lot of F-words can make you sound smart if you know which ones to use.  Frugivorous, fucatory, or floriferous will make you look like a fricking genius. Or a moron if you use them all in the same sentence.

An F-word can also convey its meaning by its pronunciation.  It takes a lot of wind to say filibuster, and most politicians are full of hot air anyway. But other people don’t filibuster, they just have fights or fleeting disagreements, like this one :

Me:  I have a catalog that’s selling a backyard zip line kit.

Me: See?  Then it’s a bargain.  We could hook it between the house and telephone pole and run it through the trees with a kiddie pool underneath it.

Howard:  You have too much free time.

Me:  I just looked under the table and your sense of humor isn’t there either.

Disagreement  finished. Futile but definitely not a filibuster.

Howard:  Junior  left streaks and fartleberries on the rug again.  I told you to watch what you feed him!

Me: So that’s what I tripped over.   I thought those were marbles!

Junior gets frustrated and flummoxed too.   Junior recently  got loose and futtered every female dog in the neighborhood.  Now Junior is facing paternity charges. And the fateful loss of his testicles…