I hate stupidity.  I could say that stupid people drive me nuts but I’m not nuts or crazy (yes, there is a difference).  So I’ll just have to say, I have no tolerance for stupid people.

“Well,” he replied, “you must have shown them something.  She definitely said the chickens were naked. ”  Hmmmm,  naked chickens.  That’s what it’s about.  A naked chicken.  I was going to ask was it a frontal nude or a fanny shot, but I was trying to avoid the proverbial white slip (warning) or even worse, a pink slip (meaning you are so out of here!).

Yes, I did show a photo of a naked chicken, in other words,  it was featherless.  But this featherless chicken was a transgenic chicken meaning it was some poor fowl whose genes  (and soon to be, eggs) were scrambled by some sadistic molecular geneticist.

“Yes, Dr. Smartz,” I finally admitted.  “The bird was indeed butt naked. I won’t show the picture ever again.”

“Good,” he nodded. “ And by the way, no pictures of hairless cows or monkeys either!”

So for all of you who don’t want to see a butt naked chicken’s bare behind or otherwise, here is a paper doll of a transgenic chicken.  You can cut out its  clothes and cover its naked little ass to your heart’s content!

(And yes, I know, there is more than one way to dress a chicken!) 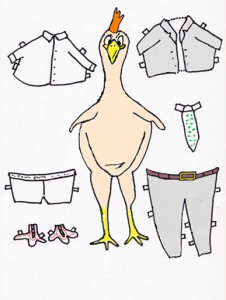