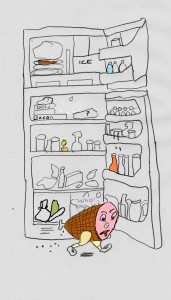 “The scampering ham was on the lam…”

I woke up today hearing voices – one of them said, “Clean the garage.”  The others said, “ Go back to sleep.”  So I rolled over and went back to sleep and had another bad dream, this one about cleaning out the refrigerator.

In our house cleaning out the refrigerator is a formidable task.  Nobody wants to do it.  So things, I call them things because, after food has been crammed in there, day after day, for weeks on end, who knows what it is.  Leftovers begin to look like primordial slime and eventually take on a life of their own

As I gagged at the sight of an almost gangrenous leg of lamb, I yelled, “Howard, isn’t it your turn to clean the refrigerator?”

“Nope, it’s your turn.  And by the way, I think something nearly bit me last night, you might want to get a rope and muzzle.” Now that’s what I call losing an argument.  Badly.  I was going to be an indiscriminate it, just like all the stuff I would have to clean out.  The dirty job was mine, and it didn’t even have my name on it.

Hmmm, rope and muzzle… I decided to make a list of cleaning tools and supplies.  I’m big on lists, like a lot of self-help gurus and websites.  So here’s what I compiled:  disinfectant, rubber gloves, yowee brush (that’s a steel bristled cleaning brush or loofah bath sponge gone mad), mop, ice pick, pliers, hammer, explosives, shovel, night vision goggles (for the meat keeper), and industrial sized wet vac.  Oh, and I forgot to add, a cage and a high powered rifle.

Now you might think that I was over-reacting but if you’d seen what was on the third shelf, you’d understand.  The second shelf?  Well, it wasn’t so bad.  It had a lot of stuff of undetermined origin.  I’d probably need a DNA kit for the meat in a bag.   The chicken thighs smelled okay.  I could feed them to the dog and find out.  (I learned a long time ago, that if the dog won’t eat something and I eat it anyway, I would be a “woman on the go” for at least the next week or longer.)  The steak fingers and hot dogs might be edible.  They had so much salt in them, they will never decompose.  If it had been snowing, I could have used them to melt the ice on iced-over sidewalks. On the other hand, their elongated, dark brown fecal appearance would probably keep people off the icy sidewalks anyway, you know, as in, “Mabel, watch where you step.  There’s s___t on the goddam sidewalk…”

But there’s that third shelf.  It reminded me of the last time I cleaned the refrigerator, when I caught my fingers in the grillwork of the wire shelving and had to get Howard to use the wirecutters.  This time it was something else, like green froth, in the fridge’s far posterior, that caught my eye.  And it was moving.  The shelf was a swamp and I could not clearly see the back.  What was that sock doing there? Were dustmites moving it?  Maybe they were rabid dustmites??? Can they bite through rubber gloves?  Maybe I should get a tetanus shot before I tackle this…

“Howard, get me the longest barbecue fork you can find!”

“How about a pitchfork!”

“Quick, I need it before it crawls out of the fridge!”

He hands me a long barbecue fork and I pull the “mass” out.  But, it’s just the decaying remains of a big chunk of summer sausage.  Summer sausage and my imagination… The gases in it must have made it look like it was on the move. Summer sausage with gas…  Then my intestines felt like they were on the move… Like they were gonna have the galloping boogies all the way to Arizona.

That was it.  I was done.  So much for cleaning the refrigerator that day.