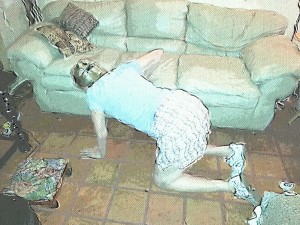 I just read an article on mindfulness meditation.  The idea is to spend time to oneself focusing only on the moment and one single thing, like breathing.  The author described how she spent five days in this state by not talking to anyone, including her family. It was an inner revival, an opportunity “to gain clarity, wisdom, and freedom…” by paying attention to “moment experiences.”

I thought about this.  Could I do this?  Me? And then I thought about it again. And again.  Could I do this for five days?  An entire week?  Not likely.  That’s a long time for me to keep my mouth shut.  And as for mindless??  For me it would be mindless alright.  Because I would probably lose my mind or what’s left of it.  Then I’d have to spend another seven days looking for it. I can see it now.  I’m scrounging around  the house , rummaging through everything I  see.  My husband, Howard, just stands there, watching it all. And then he says:  “ What are you looking for?”

“ It wouldn’t be the first time… Try looking under the couch.”

Mindfulness??  I don’t think so. Maybe mindless.  Senseless would be a better word for it. Not speaking to anyone would clear my mind.  But if I didn’t speak to Howard for that long a time, I’d get to do it just once-and it would be over.  There would be no second time.  Howard would repay the week of silence with three months of silent sulking.   I would complain:    “Why aren’t you speaking to me?”

Hours later he still isn’t talking.  I hear only silence and indignation.

“Is this because I spent last week mindfully meditating?”

He ignores me. The silence burrows through my eardrums.

“Well, I wasn’t being spiteful.”

“Sure you were,” he replies.

“I was meditating.   I wasn’t oblivious to you.”

“You should have thought of that in the first place.”

And so it would go.  An exchange of acrimony and inner  peace.  As for our daughter, Jennifer,  If I didn’t speak to her, she would cry for two days straight.

Even If I was single, I wouldn’t do it.  No sense talking to just me.  I know.   Lots of people talk to themselves.  They make verbal conversations inside and outside their heads, no listeners in sight. Sometimes we call that disturbed.   And as for keeping my mind on one thing?? No way.  Because that’s when the mental cockroaches – worries – come out.  I call worries cockroaches.  They scurry and skitter through my subconscious all day and come out at night. It’s a Florida thing. Florida has big cockroaches and I have big worries. And they are very busy at night.

When Howard doesn’t speak, it’s not because he is meditating.  It means he is real mad, angry.  Some thing, maybe something I have done, has made him unhappy.  When he gets into this kind of “meditation “ , he can “meditate” for a long time.  And while he’s doing that, I’ll meditate myself into a  good case of hives. On the other hand, I should maybe meditate on how better to avoid him when he’s “meditating”.

Not speaking could have real repercussions around this household, especially since I don’t cook.  It probably wouldn’t result in a divorce, but I could end up eating hot dogs for a week.