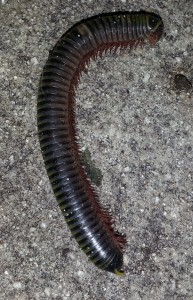 Floyd?…Floyd? Where are those files?

It’s more than a week since the end of the Erma Bombeck Writers Conference 2014.  I came back to South Florida so elated.  How else can you feel when you’ve been laughing for three consecutive days?  Now I’m back.  It’s over.  There are no more laughs. I feel sad.   And it’s going to get worse before it gets better.

I’m looking for my creativity.  I can’t find it.  I don’t know where it went.   I even looked under the rug by the back door.  All I found was Floyd, the family millipede.  Floyd is big.  Huge.  And from the looks of all the little millipedes around him (her?),  Floyd was busy while I was gone.  A lot busier than I am now.  No matter.  At least Floyd has been productive.

I tried checking my files for ideas.  Writers are supposed to have files. Conference presenter Dan Zevin showed a video clip of Woody Allen and his filing system.  (Pieces of paper piled into a wad in his bedroom nightstand.)  I have a similar system, except my pieces of paper- oops!  I meant files –  are scattered all over.  Maybe they’ve been carried away by the 200 gazillion dust mites in this house.  The dust mites have become so numerous I’m going to have to register with animal control.   Anyway, right now my filed ideas are as disorganized as my thoughts and motivation.

Presenter, Nina Amir, said “blogging makes you an authority” as she told us how to turn our blogs into books or blog about our books.   I blog.  So does that make me an authority? On what?  Dust mites?  Should I study them? There are certainly enough of them around here.  Should I publish articles about them?  What if they get bigger?  Very big?  Maybe I should just get a big net.  A very big net and a very big broom.  Maybe I should also get a stun gun.  And then I could write about The Dust Mite Wars.  I know, I could make it into a series, kind of like the zombies in World War Z.

No naked or transgenic chickens here…

When I was a college freshman,  I majored  in engineering and then biology.  I preferred equations to sentences.  I was confused then.  I just didn’t know any better.  Confused…that sounds familiar, very familiar.  I didn’t know if I should be pre-med  or something else.  I was on my way to class one day and as usual, I was late or almost late.  As I was approaching the engineering building, a custodian stabbed a piece of paper with his pointy trash picker upper and said, “Do youuuuu know where you’re going?”

My first reaction was to stop and huff and puff.  I was running uphill.  No easy feat on a hot, humid, Gainesville, Florida, day.   I stood there, dead in my tracks.  I thought, What the hell does he mean? Does he think I’m lost? Do I look lost?  Or is his question philosophical?  Maybe he is just asking if I know where I am going in my life.

Okay, I know that was years ago. And I’m still not sure that I can answer his question.   But the point I want to make is that, one conference like EBWW 2012 or EBWW 2014, can make a huge impact on your life.  Yes, I laughed my ass off at both of them, but I don’t think laughing was the only objective.  At the first one, I was motivated to leave a successful career in science teaching to write, and at the second one, I am motivated to persevere and pursue what continues to make me happy – writing.  I also made new friends and contacts, encountered new ideas, and learned a lot about the business end of writing.

Now if I could just find those files.  I’ll go ask Floyd.