The other night, Halloween, was a long night. No sleep for me, whatsoever . I had apprehensive moments all night -dialing in the numbers to call Ralph on the great white intercom. All because I had to go and eat a half a bag of potato chips, followed by chasers of m&m’s, Snickers, Milky Ways, Twix, KitKats, Hershey’s, Nestle Crunch, and 3 Muskateer bars. ..ad nauseum.   You get the picture. 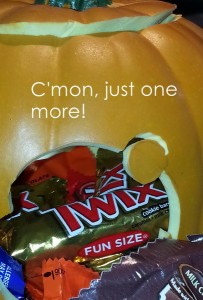 Now mind you, I didn’t eat the whole bag of potato chips. But that was because there was only half a bag left. So I ate what was left in the bag and I enjoyed every remaining morsel of salt and grease.

But I have a gall bladder issue – greasy foods and I don’t get along. My gall bladder trashed my small intestine like Sherman marching through Georgia. My common bile duct tied itself up in knots and my gut swelled like the Goodyear blimp. I should have been whistling like a teapot from the other end. But that didn’t happen. I was sure I was going to explode like Mr. Creosote in Monty Python’s Life of Brian. (https://youtu.be/lhbHTjMLN5c/   Warning. Watching this clip may make you sick. But it is funny!)

There’s something to the overconsumption of all that salt and grease.   I gotta have it. It makes food tasty and gooood! Salt and grease are both so addictive, almost as bad as sugar.. And I was hungry that night. At least my brain said I was. There is something contradictory when your stomach says it’s had enough and your brain says, “Oh no you haven’t!” The brain takes over, or maybe it cedes control, and you eat like a pig with no thought of the consequences: bloat, distension, or diarrhea.

On the other hand, maybe I’m just another impulsive , opportunistic eater. I’ll eat whatever is in front of me. Just like almost everybody else in the world.