It’s two weeks into February and I still haven’t made any New Year’s resolutions.  That may be a good thing because if I had made a resolution on indecisiveness or procrastination…

I usually don’t make New Year’s resolutions.  Why? Because I don’t keep them.  But this year, I  thought I should make an exception.  I’ve convinced  myself self-examination and reflection are  good things… as long as I don’t drown in them. There’s no point in going overboard! 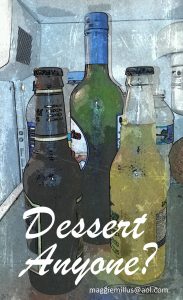 I’ve considered lots of resolutions but most of them are retreads from previous years, resolutions that I did not keep. They are broken resolutions that either gobbled up my self-esteem (along with everything in the refrigerator)  or caused friction among family and friends as I exuded buckets of insincere congeniality.

This year, I will do things differently – eventually.  I’ve decided to make resolutions that I know I can keep. And I’m going to make more than one.  That way if I keep one or several, I’ll be able to feel really good about myself and maybe even brag about it. (None of my resolutions will involve pride or arrogance.)

I should have these resolutions made by March, April, or maybe as late as May. No need to hurry because I want to get them right.

So…what to resolve?  In the coming year of 2017, I could resolve to do the blatantly obvious, like

On the other hand, I could be less skeptical and more optimistic by making some real resolutions like: 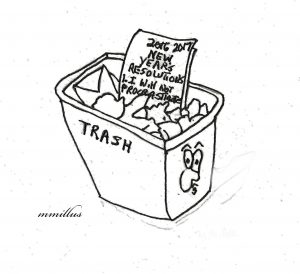 The good news is – there are some resolutions that I definitely  will keep, like

There are a lot of other resolutions  I could make, but I’m going to think about them  for a while and maybe just pick one sooner or later.   One thing I’m sure of, procrastination or indecisiveness won’t be on my list.