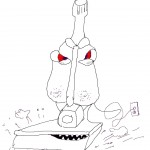 The vacuum was overwhelming…

Vacuum cleaners.  I hate housework, especially vacuuming the house.  Not that I won’t do it, but before breakfast???  It was 6 o’clock  this morning when Howard emerged from the bedroom.  Instead of the usual sleepy trudge, he’s hauling ass to the utility closet and clutching his throat.  At first I was impressed, I’ve never seen him so awake this early.

“Hey Speedy, are we going out for breakfast?”  Boy was I naive, I assumed food must be involved.  But no, all I heard was, “!#*&^@!!  dust bunnies… gonna give me asthma.”  Now I  know I sound ungrateful, after all, how many women wouldn’t appreciate having their husbands vacuum the house? But so early in the morning?  And besides, he’s not asthmatic.

Maybe it’s the vacuum cleaner. It’s really noisy and noise makes me irritable.So cantankerous, I’d like to take to it with a baseball bat. It sounds like it’s going to fram the tile floor to pieces.   When my husband pushes the dang thing all over the house, the engine screeches bloody murder and dirt and cat hair fly into its Lucite cylinders like hoards of flies coming to a dog pile. It has no bag and  crud spews out everywhere from underneath it.   Why not get a quieter vacuum cleaner?  Howard says we need power!  Power to suck up all the dirt, dust mites, and cat hair (a condiment around here).

Now if I was the one  making all that racket…

Citizenship.  I was born in Pennsylvania, not Palm Beach County, Florida. ( Maybe  I should have said I live in South Florida because living in this part of the state is like living in another country.)  How long have I lived here?  Long enough to consider myself a naturalized southerner.

But what exactly determines who is a naturalized southerner?  It  isn’t birth and it really isn’t how long or where you have lived in the south.  There are, however,  a few attributes that you may have acquired and they would certainly account for a southern point of view. Consider:

1. You think a 4-wheel drive pick up truck is a bare necessity

2. You think living in a double wide is high class

Being married to a natural born southerner also helps.  I could also claim conferred citizenship by marriage.

December-May vs. May-December.  I asked Howard if he wouldn’t be happier with someone 30 years younger (Like Neil Diamond, who at the moment, seems to be ecstatically happy with a much, much younger wife.)  His reply, “No way.”

“Then I would consider it.”

“So, if I stick around, you’d still keep me, even though I’m the older model?”

“You  know,” I replied.  “If I met a you that was 30 years younger, whether or not the current version of you was still around, you know what I’d do?”

“I’d run like hell the other way.  No looking back either.”