I was watching somebody do something incredibly stupid the other day.  And I wondered just how stupid can somebody get?  How low can they go?

There must be some law of nature, more integral than Darwinism, that determines how stupid a person can be, a law that goes all the way down to atoms and molecules  and the restrictions that the universe places on them. So…is stupidity a matter of Biology? Physics?  Chemistry?  Probably all if you think in terms of the properties of matter and the various chemical relationships involved .

I’m sure stupidity exists on a quantum level.  It’s probably even organized into discrete units of adverse blunders. Most people do a lot of stupid stuff, but usually not all at once.  If they are lucky, they do it by fits and starts,  one stupid mistake or gaff at a time.   Like telling a friend, “Your newborn baby is adorable.”  And then asking, “Is it adopted?”   Followed by, “Are you sure?”

Some mistakes can cascade. They become sequential and linked, like bad eating habits. For example, I know  I’m lactose intolerant.  But I’ll eat a cheese sandwich anyway because I’m an optimist and so far, I’ve survived .

I can even eat a small bowl of ice cream.  No problem – usually.  Sure, I get gas but with some Lactaid I won’t explode (not yet).

But a whole quart of ice cream?  Big problem.  Yes, I took the Lactaid but did I have to eat the whole quart?  And what about a “Kitchen Sink”, the alpha and omega of big sundaes?  I’ve eaten one of those once.  Just once.   With bag of potato chips.  And the Lactaid I took? Well, let’s just say the experience was a drop in the bucket in more ways than one, an insufferable Hindenburg. 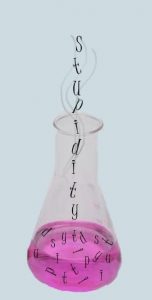 I’ve also learned  from a lifetime of observation that stupidity can have different levels of energy and intensity. And aggravation.  Like teaching your kid how to drive, it’s almost a guaranteed trip to bedlam.  Just being in a car with a teenager behind the wheel can be terrifying.  Their not signaling will give you hives.  Their speeding will give you a nervous tick.   But one failure to yield the right of way can spaz out an entire large bowel if it doesn’t put you in the hospital or morgue.

Some behaviors are crazier than others and the dilemmas they create are harder to predict.  Like the effects of excessive shopping .  Buy a few things  and nobody cares.  Buy a lot of  things and someone, like a relative or spouse,  will begin to  notice (and more likely the bank when you don’t pay up).   But, if you buy, buy, and then hoard tons of old shoes, hats, suspenders, newspapers,   and used dental floss,  your family will  call a dump truck.  Then they will cart you to a shrink who will ship you off  to a rubber room. You might even be on TV.  And if you die, they will give away the rest of your things, and you won’t be able to go shopping for more.

Is stupidity addictive? I don’t know. Some people just can’t help themselves.   And some people are just  dumber than others (maybe that should be lots of people). They tend to gravitate to lowest possible level of intelligence. For those people,  there are days when stupidity levels stays at an all-time low.  I say low because stupidity is never completely absent (or at a zero level ). It is always there, latent, waiting to be expressed.   A stupid person may seem to be getting better,  but they are never, ever  cured.

Stupidity has its own rules.    Because it can neither be created nor destroyed, it is its own self-perpetuating entity.  It goes on forever, which explains why you will have to leave the planet just to get away from it.  On the other hand, if you are leaving, you’d best be going by yourself because you don’t want to bring anyone else’s stupidity with you, it’s bad enough bringing your own.